*Purpose: BK viremia is an important problem in the pediatric renal transplant population leading to increased risk for viral associated nephropathy in the transplant. Early identification of BK infection is shown to be key although treatment remains difficult. No antiviral medications have been identified or approved. Decreasing immunosuppressive has been a primary treatment although this increases risk of rejection and loss of graft as well. Other treatments such as use of Cidofovir, discontinuation of Cellcept, initiation of leflunomide, IVIG or a combination of these has been advocated with inconsistent results. In the pediatric population, especially those with history of CKD/ESRD, IV administered options are difficult due vascular access problems. Inability to administer IVIG due to access and insurance has forced transition to weekly home infusions of IVIG administered by parents.

*Methods: We retrospectively reviewed our experience with the use of Hizentra in 5 pediatric renal transplant patients and 1 cardiac (now ESRD) transplant patient between 2011 and 2017. BK viral loads were assessed monthly while on other treatments as listed above and continued monthly while on Hizentra. Associated clinical information including immunosuppression management, dose adjustment and BK trend while reviewing its effect on kidney function was noted.

*Results: Patients noted to have significant improvement of BK viremia (viruria) after being transitioned to Hizentra. All patients shown significant decline in viral load with ongoing stability and preservation of renal function while on Hizentra.

*Conclusions: Our small, single center population has had a very promising response to this novel intervention. 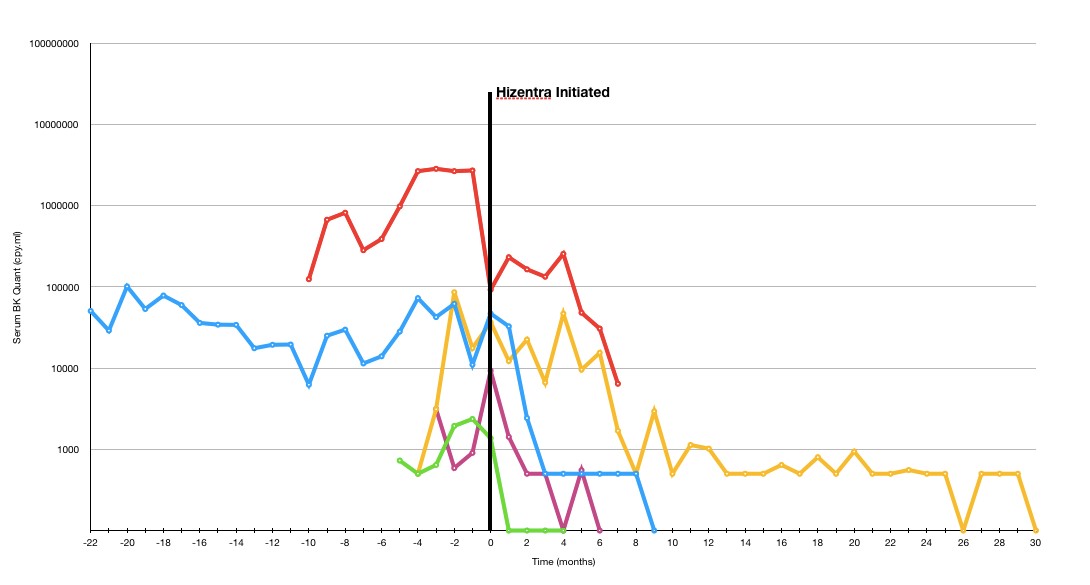