*Methods: From 1997 to 2017, 267 kidney graft failures of adults were detected and retrospectively analyzed. DnDSA were detected by solid-phase assays. Epitope matching was performed to predict development of dnDSA using the PIRCHE algorithm. Furthermore, the waiting time between re-listing at Eurotransplant and re-transplantation as well as graft survival and patient mortality depending on immunization were analyzed by means of Cox proportional hazards regression. Landmark analysis was used to avoid immortal time bias when assessing the effect of immunization on graft survival.

*Results: In total, the risk for graft failure was highest in the first two years after transplantation and then moderately decreased (Fig. 1). DnDSA were detected in 137 allograft failures (51.3 %). The occurrence of dnDSA was associated with a higher PIRCHE score (Fig. 2). When immunization was diagnosed within one year (Fig. 3) or within three years (Fig. 4) after transplantation, the patients had a significantly higher risk of graft loss. The waiting time for re-transplantation was longer when patients were immunized before relisting at Eurotransplant (Fig. 5). Surprisingly, when dnDSA were diagnosed before the first graft failure (66 patients), their mortality was lower, especially within the first two years after graft failure (18.8 % vs. 34.4 %), (Fig. 6).

*Conclusions: The immunization seems to have a great impact on waiting time for re-transplantation and kidney allograft survival. The PIRCHE algorithm may help to reduce the risk of dnDSA. The relationship between immunization and mortality needs further evaluation. 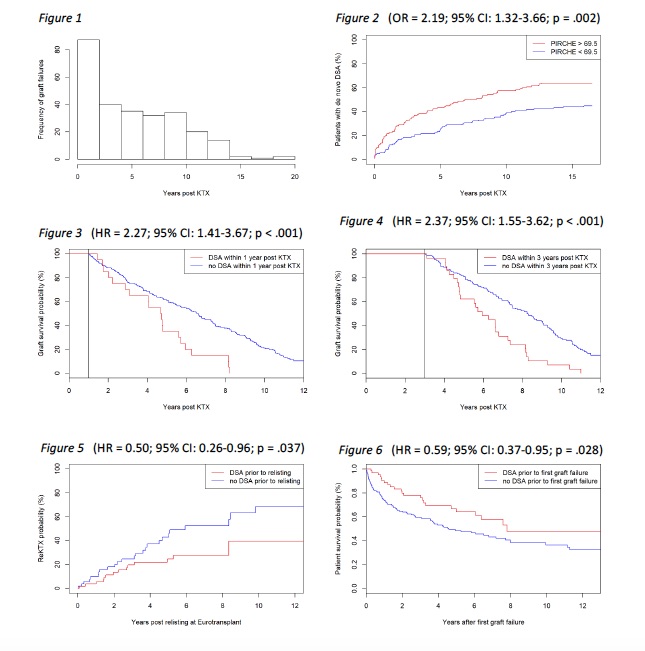