*Purpose: Owing to their fixed dosing and favorable drug interaction profiles, direct acting oral anticoagulants (DOACs) have supplanted warfarin as the standard of care for oral anticoagulation in a variety of disease states. Despite these benefits, DOACs have not been extensively evaluated in select populations, including solid organ transplant recipients (SOTRs). Furthermore, no comparative outcomes data between DOACs exist. We evaluated bleeding and thrombosis resulting from the use of apixaban versus non-apixaban DOACs in a large cohort of SOTRs.

*Methods: Single-center retrospective cohort study of adult heart, lung, liver, and kidney SOTRs who were transplanted between Aug 2009 and May 2018 and received apixaban, rivaroxaban, or dabigatran after transplant. Patients were stratified based on receipt of apixaban. The primary endpoint was incidence of bleeding between apixaban and non-apixaban groups, which was defined according to the International Society on Thrombosis and Haemostasis criteria as either major or clinically relevant non-major. The secondary endpoint was incidence of thrombosis between groups.

*Results: 94 SOTRs who received DOACs were identified. The majority of patients who received DOACs were kidney transplant recipients (46.8%), followed by lung (27.7%), and heart (16%). Deep vein thrombosis was the most common indication for DOAC use (36.2%), and apixaban was the most commonly used agent (68.1%). Baseline characteristics were similar between apixaban and non-apixaban groups with the exception of DOAC indication (p=0.047). Initial DOAC dose adjustments were more common in the apixaban group (43.75% vs 20%; p=0.025). The cumulative incidence of bleeding was higher in the non-apixaban group (Figure 1), as was the overall bleeding incidence (33.3% vs 12.5%; p=0.017). Receipt of non-apixaban DOACs was the only variable associated with bleeding (OR 3.81, 95% CI 1.19-12.14) on multivariate logistic regression. Incidence of thrombosis was similar between apixaban and non-apixaban groups (6.3% vs 10%; p=0.676).

*Conclusions: The use of non-apixaban oral anticoagulation was associated with a higher incidence of bleeding in our cohort of SOTRs. 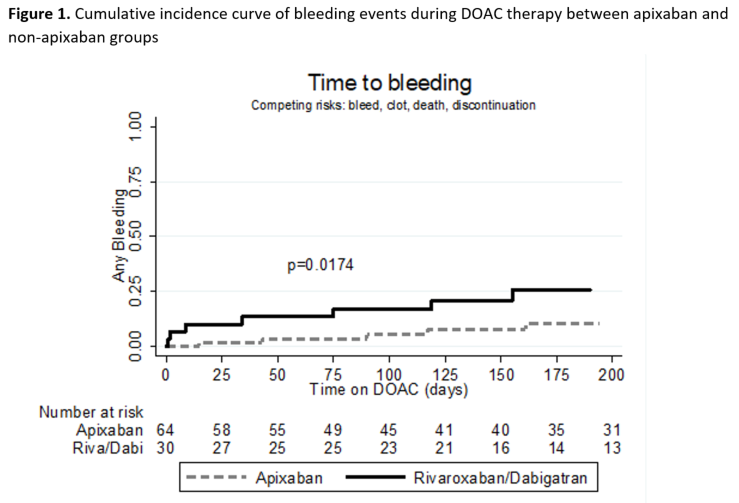