The utility of time-zero biopsies after orthotopic liver transplantation (OLT) remains unclear. The aim of this study is to evaluate histological grade of ischaemia/reperfusion injury (IRI) on time-zero biopsy as a prognostic indicator following OLT.

Between February 2000 and 2010, 647 OLT were performed at our centre. Time-zero biopsies were available for 474 patients. Patients were divided into four groups based on histological grade of IRI: nil (50), mild (280), moderate (124) and severe (22) and clinical data compared for each.

Biopsy score severity was strongly associated with recognised risk factors for IRI, including donation after cardiac death, donor age, donor BMI and allograft steatosis (p<0.001). Higher IRI grades also correlated closely with markers of an ischaemic insult, such as the incidence of post-perfusion hyperkalaemia (p=0.01) and peak ALT in the first seven post-operative days (p<0.0001). Interestingly, neither cold nor warm ischaemic times were significantly different between groups (p=0.27 and 0.38 respectively).

Notably the degree of steatosis on biopsy did not correlate with graft survival (p=0.37), retransplantation within 90 days (p=0.82) or PNF rate (p=0.07), suggesting severity of IRI to be an independent predictor of graft outcome. 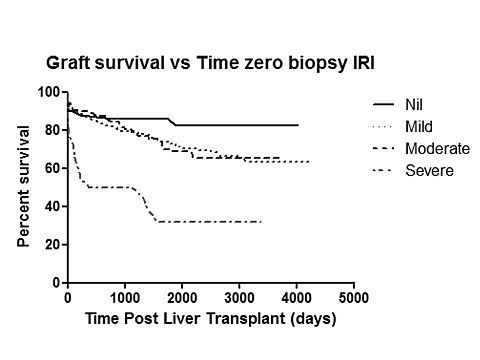 Time-zero biopsies have value in predicting adverse clinical outcomes following OLT and allow identification of patients at risk of a complicated post-operative course. Our analysis suggests that early re-transplantation should be considered for recipients whose time-zero biopsy reveals severe IRI.

« Back to 2013 American Transplant Congress